Simmons’ artwork is one of a series of photographs that investigate our contemporary political landscape. The piece shows a figure gesturing in a field, an art historical reference that figures greatly in the artist's work. Text painted at the top of the image reads: “Freedom is not guaranteed.” Recognizing that for Black descendants of North American chattel slavery, freedoms have been captured only through great struggle, this work points to the founding structure of the United States, the legacy of slavery, the construction of race, the failure of emancipation, and how they continue to affect our lives today. This piece was originally displayed in South Dakota as a part of For Freedoms' 2018 campaign, the 50 States Initiative.</span></p><p><br></p>Xaviera Simmons received her BFA from Bard College (2004) after spending two years on a walking pilgrimage retracing the Transatlantic slave trade with Buddhist monks. She completed the Whitney Museum’s Independent Study Program in Studio Art (2005) while simultaneously completing a two- year actor-training conservatory with The Maggie Flanigan Studio. She is a visiting lecturer and the inaugural 2019 Solomon Fellow at Harvard University and will be awarded The Charles Flint Kellogg Award in Arts and Letters from Bard College in Spring 2020. Simmons has exhibited nationally and internationally where major exhibitions and performances include The Museum Of Modern Art, The Studio Museum in Harlem, The Contemporary Arts Museum Houston, The Public Art Fund, The Sculpture Center, The Aldrich Contemporary Art Museum, Museum of Contemporary Art Chicago, Institute of Contemporary Art Boston, and Brooklyn Museum, among many others. 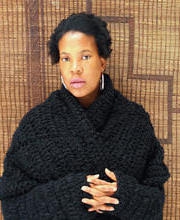